Congrats to the freshman Hannah Wilson on earning GMC Athlete of the Week Honors for Girls Tennis!!! (Week of 9/18). Hannah Wilson Middletown – Freshman Tennis Hannah fought back to win the back draw at second singles in Flight G at the Coaches Classic, avenging an earlier season loss to Northwest’s #2 singles player. She

Attention all prospective High School Girls Tennis Players: There will be an important meeting Wednesday February 8th 3:15pm in the Manchester Media Center.  All players interested in coming out for the High School Girls Tennis team next Fall should attend.  For more information or questions, contact Head Coach Seth Fair at sfair@middletowncityschools.com or 937-527-1260. 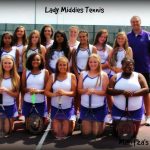 MIDDLETOWN – It has been 1474 days since the Middletown Middies’ (1-13) girls tennis team last relished victory over a Greater Miami Conference opponent. To put that in perspective, President Barack Obama was running for a second term in office. Psy’s “Gangnam Style” had become a worldwide pop-culture phenomenon, and there was no bigger story

MIDDLETOWN-Middletown High School is not the only thing on the Breiel Boulevard campus under construction, so is the rebranding of the Middies varsity girls tennis team. Although their goals aren’t built with brick and mortar, skill development that will allow for consistent success while competing at a high-level is. When laying the foundation for a

No Events This Week

Events are added by athletic staff.
View All Events